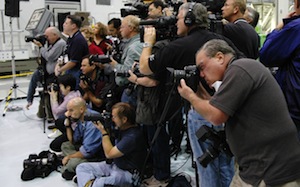 If you’re like most people, you probably dread writing press releases.

Finding that perfect balance between news and marketing.  Taking care of the formatting and layout.  Contacting the right distribution sources and reporters.

It can all be pretty uninviting (to put it mildly).

I hope that this 6-part series will help demystify the process and make writing solar press releases much easier – maybe even enjoyable?

What Is a Press Release and Why It Matters for Your Solar Business?

First, let’s start with the basics.  What exactly is a press release?

That’s simple – a press release is a statement prepared for distribution in which you announce a new service, product, campaign, or event – with the aim of generating media coverage.

So why do press releases matter?

There are actually several reasons why solar press releases are great for your business.

Press releases help you quickly generate awareness of products and services in your line-up.  This is the primary purpose of press releases.

Usually the products and services are new, but with the right spin, you can “remind” people of older offerings as well.  Perhaps you added a new feature to an existing solar product or you’ve expanded your business hours.

It’s one thing to discuss your great new product on your own solar energy portal.  It’s another thing if the praise and announcements appear on another site – especially if your press release has been reworked by a journalist.

Never underestimate the importance of third party, social proof.  Obviously, people will know that your company is behind the coverage.  But seeing a reputable, independent logo above your story makes it seem a bit more objective.

By distributing your solar press release to journalists and news wires, you maximize exposure.

No matter how amazing your solar company’s site is, you’ll reach many more eyes if you publish your press release on as many outside sources as possible.

This is especially true in the age of RSS feeds since many people don’t even visit actual online newspapers anymore.  They simply digest new stories through their feed aggregators.

This happens in 2 different but equally useful ways.

First – by weaving hyperlinks into your solar press release and distributing this article on other news sites, you get a ton of backlinks.  Each one of these links is a “vote of confidence” that tells Google, Yahoo, and Bing that your site is an authority on whatever keywords you’ve decided to hyperlink.

Second – you can piggyback on the SEO work of other sites.

What often ends up happening is that distributed versions of your press release rank high in Google even though the version on your site doesn’t rank very well.

The version on your site might be #34 in the search engine rankings, while the same version on Renewable Energy World is #2 for that same keyword search.

Now, in theory, this might upset you.  After all, you want the version on your own site to rank higher than anyone else’s.  Combatting duplicate content can be a pain.

So even though your site ranks #34 in the search results, your press release (and thus your company’s exciting story) receives higher rankings since Renewable Energy World is a much better optimized site.

So now that we’ve covered the What and Why of writing press releases, you should have a pretty good understanding of how important they truly are.

This doesn’t mean you have to like them.  Not many people do.  But they’re unavoidable, and you’d better get used to them if you want your company to excel.

However, don’t despair.  In the next few installments, we’ll dissect the process to make writing press releases a little less daunting.

Next up – the “Who” of writing solar press releases.  In the meantime, share your own good and bad press release experiences down below.

Austin is true professional copywriter...we have benefitted a lot from his expert insights on solar energy.